All Cyclists Are Beautiful

All Cyclists Are Beautiful

Makvärket – pay attention to the swinging people, visible in the opening in the house in the center of the drawing ! (kind of hard to recognize, though)

Stage 10: from Svendborg to Makvärket (I had to take a train to get from one island to the other)

I arrived pretty exhausted at Makvärket in the evening. It is an ancient ceramics factory, which is filled up with new life by a modley crowd of people.  Almost the first thing that happened, after I was completly overwhelmed by the first impression, having put my stuff in a sleeping-room, was sauna. Sunday is sauna-day. Okay, I haven’t been in the sauna for about 12 years. I think, I had too much of it after non-stop-sauna with my family in an alpine-hut. But well, things change. I also eat broccoli and I like it, why not try sauna one more time. So we went once around the gigantic clinker building on a big meadow. Next to the sauna-cabin there was a hobbit-like cottage, a yurt and a massage bank (a body’s silhouette sewed out of plywood, sleeping pad glued onto it). Sauna was totally fine, actually, they also didn’t heat it up so much. Then, in the setting sun, we poured cold water over each other’s head. Quiet kitschy-cliché-paradise-like, haha! Well cooked, the 100 Kilometer in my legs changed from potentialy hellish muscle ache to pleasant exhaustion. After we were having vegan homemade pizza for dinner all together, I slept like a baby.

I found a volume of an old danish encyclopedia in the free-shop and catched some moments in drawings, like this stock of old ceramic-moulds which are still standing around everywhere. They are really beautiful!!

Makvärket is a neologism. Translated word by word it says ‘botch factory’. But the meaning is more ‘improvisation factory’. It’s about to reach the best possible with the means that are available. Also if that’s not perfect in the end.

Somebody bought the decaying brick buildings for one crown and since then they are transformed slowly but surely into a wonderful place of collective living. The people are puttering day after day about different projects, renovating rooms, plastering walls in traditional technique with different coloured clay, building bunk-beds, pulling up weeds, throwing slugs as far away as possible, repairing bicycles, mowing meadows with the scythe, there are a 1000 things to do!
During the week I spend there, I turned the lamps- and wires stockage upside down and found 10 out of 50 lamps that were fine and put together another 10 with the spare parts. And then I fixed some in the new sleeping rooms on the beds. My masterpieces were just lamp sockets screwed into old plastic boxes as lampshades. Besides I helped plastering one of the walls with blue clay. And in the hallway, I painted some fantasy-animals.

The forest was already there, with the demand to add some animals. I followed..

With all these tasks to be done, also to take care about eating, would be quite irritating and keeping back. That has often been a problem here at Quelle. You are working half a day, are really into it, but at some point you just can’t go on because the belly wants to be refilled. And then, to get food from somewhere, never mind to prepare it, is really hard. At Makvärket, this is different:  Every weekday there are 3 fix meals –  breakfast at 8:30, lunch at 12:30 and dinner at 19h. Every morning they arrange, who is taking care of which meal. (and also who is watering the garden and who will go dumpster-diving, if necessary) So you cook 3 times a week for 15 people, but the rest of the time you don’t have to worry about that. And when all the vegetables, fruits, bread and lemoncakes are finished, a team, armed with headlamps, a pile of boxes and gloves, is going to raid the dumpsters of the next small town. A car, filled up to the top, is enough for about one week, depending on how many people are staying at the factory at the moment. The boxes are emptied in the evening and the morning after, the prey is washed, also the plastic-packaging of the lemoncakes (there are tons of it every time, apparently). Everything is put into a drip-dry rack and later is sorted into the stock. 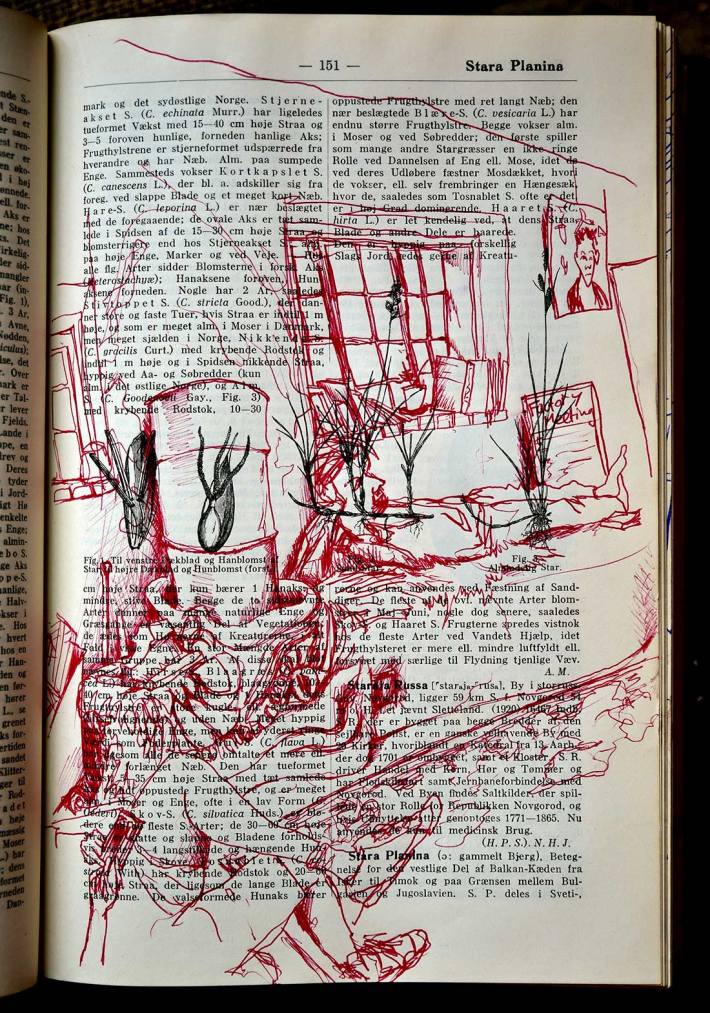 The dragon-shaped clay-stove in the gigantic living- and dining room. Its going round along the wall and you can sit on it. Surely awasome in wintertime!

I think, the Makvärket-Collektive is the best organised and cleanest community I’ve seen so far. Every monday is cleaning day. Once a week, the current staff gets together for the “Factory Meeting”.

At first there is an introductory-round with

Then, there is a round with Messages, means, everyone who has something to tell to the others, can do it here.

Next thing is the collection of agenda-points and then one after the other is discussed.

The distribution of the weekly responsabilities followed, I think. Who takes care about

Afterwards, there was the hosting-update, requests are being discussed and denied or accepted. And if so, a kind of ‘parent’ for every incoming person or group is chosen.

Next point was skillsharing. People could say what they can show or if they want to learn a specific thing. Quite a lot came together: A welding-workshop, a running-workshop and a lecture about lucid dreaming.

And finally the funny things: Cultural evenings can be proposed. A jam session and a sports and games evening were convened!

By accident, the big mothly meeting took place when I was there. But is was apparently above-average relaxed, because everybody was on holidays at the moment or just returned from holidays or soon would leave for holidays. The longest discussion was about who should be invited to the Makvärket-trip. Normally it takes the whole day with, lunch-break and so on…

The attic, almost empty. Only a few shelves with ceramic-mouldes were standing around. HJÆLEM RÅ!, which was sprayed in red over the door means “helmet on!” May be some bricks could fall down…

With the time, the Makvärklers set up a gigantic material-stockage. You can find almost every somehow needed thing you can think about. In one room, there is the wood, in another different sorts of tiles, in the next room washing machines and cookers, one shelf with paint pots, one stock with tables and caports. And again and again you can find the remains of the old factory in between. In the freeshop, for example, the old ceramic-ovens are still standing. 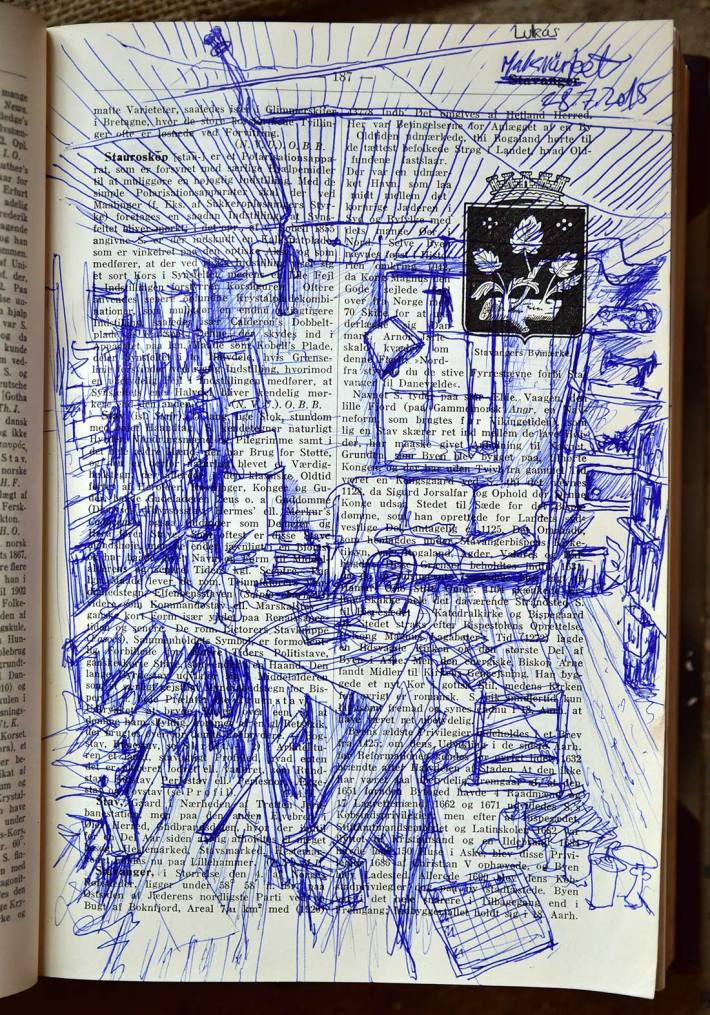 The library in the freeshop.

On the meadow in front of the house are 6 compost-toilets, in which you can relieve yourself in some tanks. I have no idea how they get the shit out of that again… And there is a solar-shower which is wonderfully roomy. You are standing on pebbles and the sun-warmed water runs over you. After that you can dry yourself on the meadow in the sun. Also worth mentioning is the at least 15 meter high treehouse, where you can also spend the night. Unfortunately, I missed that one. Next time!

The swings in front of the tool shed with view on the garden. Big parts of the soil is contaminated, which makes usage difficult…

What I didn’t understand, was that there was not a single Danish person there. From time to time some were passing by and also for the big meeting many Danes came. But no locals were staying permanently at the place. Which made it a bit hostel-like… I don’t like that too much… And for the people living there, the fluctuation is very exhausting, I think. Anyhow, I heard that these people are “tired”. And are thinking about leaving. But it has to be mentioned, that I was there during the silly season. We even had a chat about this word, that it exists in every language but in a different way: the German Sommerloch would mean summer-hole and the danish agurketid is the cucumber-time. Nevertheless, so much stuff was going on!

Makvärket was a place, where I could have drawn forever. Here is the rest of my impressions: 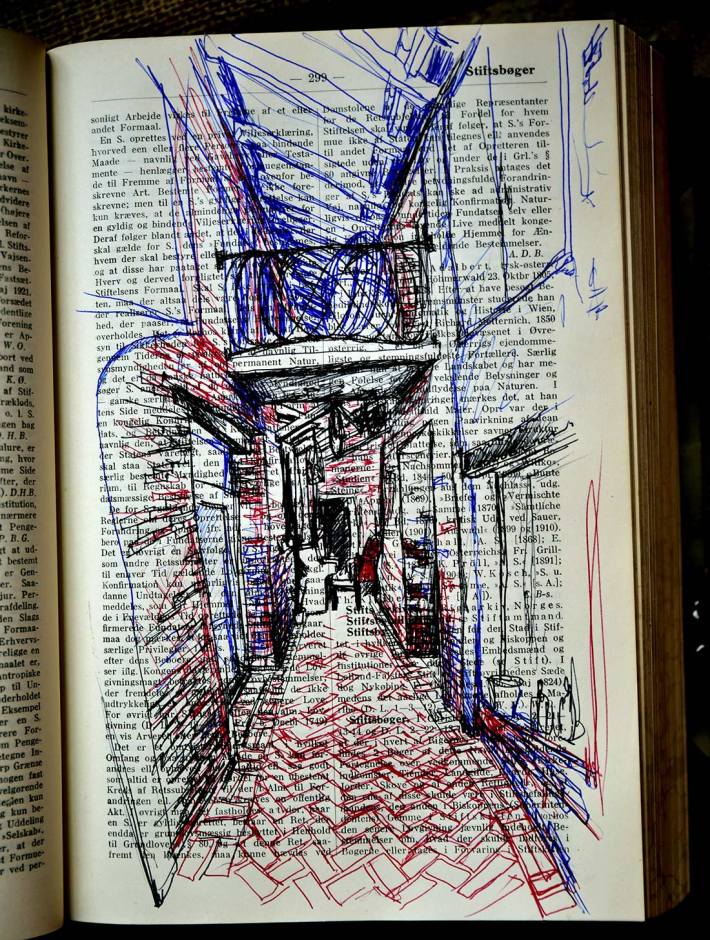 A part of the hallway between the two buildings they roofed over with glas. The rest is supposed to be done next summer with the support of “Axt und Kelle”.

After 10 days in this paradise-bubble I left with one of the Makvärklers by bike to Copenhagen.

Thats enough now! I will devide part 3 – Makvärket and Copenhagen with this in two parts.

As a consequence up to come: part 4 – Copenhagen and back home.

Here you can read part 1 und part 2 of my bicycle-trip-report.